Buddy Baker got a bit more than he bargained for when he decided to use his powers to become a super–hero again. Originally a stunt man, radiation from an alien spaceship allowed him to assume any nearby animal’s powers. He could pick up the grace of a cat, the flight of an eagle, the speed of a cheetah …usually for only a limited time, but long enough to make him a hero. He retired, but against the wishes of his wife, decided to once again go public for fame and glory.

Under the scripting hand of Grant Morrison, this series has taken on a darker aspect. Rather than just adopting the animals’ powers, Animal Man can now prowl around in their bodies like a second consciousness, traveling from body to body. This title evolved into dealing with adult themes, such as alcoholism and death, and casts a philosophical bent on the relationship between man and animal.
3rd Printing; Collects #18-26 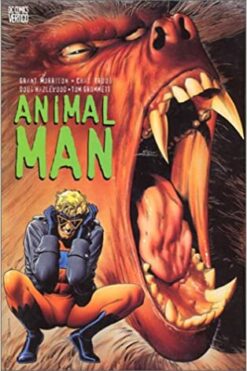