Kevin Smith (Clerks, Mallrats, and Chasing Amy) says it well in his intro: “Everyone’s a Garth Ennis fan these days, for cryin’ out loud!” That may well be true because, in this reviewer’s opinion, no one in the industry — and I mean no one — can more effectively blend bloodshed, drama, and subversive intellect into comic writing like Garth Ennis. Check out his Preacher titles to get the gist. Blazingly original, irreverent, and — yes! — smart. And Hitman follows suit. Shabby tough guy Tommy Monaghan is a hit man of some notoriety, but lately he’s got a contract on his own head, to the tune of 100K. So every shooter in town’s going after Tommy with, well, 10,000 bullets. Want to know why? It’s pretty gross…but I like gross! See, there’s this mob boss named Moe Dubelz, and he’s big — big as in he makes Dutch Shultz look like a small-time numbers runner. Now here’s the part you’re gonna love. Moe has, well, two heads; he’s what they call a conjoined twin. In other words, one head is Moe, the other head is his brother Joe. And two years ago Joe got his coconut popped by Tommy’s expert marksmanship. This leaves Moe with a considerable impediment: He’s got a dead head lolling next to him, and the left half of his body is rotting. No wonder the guy’s pissed off!

Enter pistol-meister Johnny Navarone (picture Mickey Rourke with muscles, in a white double-breasted suit). Johnny’s a Philly Shooter — and that ain’t a drink — and he’ll put our jaded hero on ice for a smooth half a mil. Here’s where this book takes off, in all its urban dirt and gutter life and evil SOBs waiting around every streetcorner. (Hmm, sounds kind of like where I live.) But this ain’t New York, folks, and it ain’t L.A. It’s Gotham! Tommy and his bad-ass hunting pal Natt lock and load, then, and embark on a human turkey shoot to make Pacino in Scarface proud. Here Garth Ennis displays still more of his creative versatility in style and action that won’t quit. And you won’t quit either, until you’ve turned the last page. 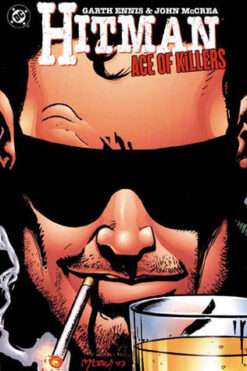 Hitman Vol. 4: The Ace of Killers