All-Star Western (2nd series) #10 back in 1972 saw the introduction of a former Confederate bounty hunter come riding out of the west with a horribly scared face and the attitude of a loner with little to loose—or Jonah Hex. Moving on to various appearances in Weird Western Tales, Jonah finally had his own eight year run in Jonah Hex and various one shots over the following years, including a trip to the future for eighteen issues of Hex. Now DC has loosed the writing talents of Justin Gray and Jimmy Palmiotti to bring the poignant tales of our old west bounty hunter back to the comic book pages. With Luke Ross at the artistic helm, DC may bring back a whole new era of those bygone days

From the Comics Buyer’s Guide:

The long-awaited return of Jonah Hex is here! Fans of the amoral gunslinger will not be disappointed. Justin Gray, Jimmy Palmiotti, and Luke Ross give readers their take on the scar-faced bounty hunter.

In “A Cemetery without Crosses,” Jonah Hex is hired by Joshua Foster, a wealthy crippled rancher, to find his abducted son. The trouble is that, when Jonah finds him in the camp of a traveling dogfight show, the boy’s dying of rabies from an infected wound. The question becomes: What do you do to a man who willingly feeds children to dogs? Only Jonah Hex can answer that one.

Luke Ross does an incredible art job. The panels are not crowded, and, in their stark economy, the moral crisis of the tale is allowed to shine through. I think I even saw Clint Eastwood on page 9!

Fans of the original series will see hints of the John Albano creation, but this team has defined its own Hex. Circle the wagon boys, this team is going to produce some classic tales. 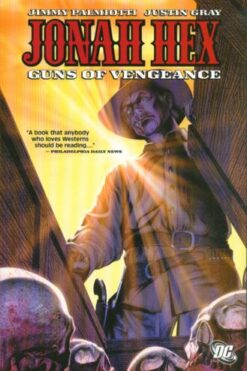 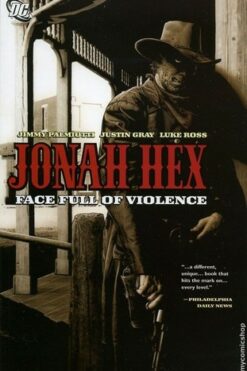