“As the First Priest of Gathia, I’ve seen her in my visions …” says the high priest, as Sonja fights for her life in the arena. Thus begins her living and dying in the kingdom of The Celestial One.

This is no charmed life for Red Sonja. Surviving the pit, she is condemned (honored) to be the sacrifice to The Celestial One, while the First Priest recognizes her as the chosen one. All is not well in the kingdom. Death. Resurrection. Rebellion. Betrayal. And, beneath it all, rumblings of power changes in the kingdom do not bode well for the red-haired beauty.

Sonja is more than a slaughter-per-issue series. With Michael Oeming writing a book crisp with characterization and seething with real people, the creation from Robert E. Howard’s world is in good hands.

As for the art, Mel Rubi conveys a stylish interpretation of the story, complete with buxom Red Sonja (in various stages of concealment) and monsters in the dark. Fluid storytelling is his forte.

Coverwise, gotta love it, when Neal Adams steps up for one of the many variants! 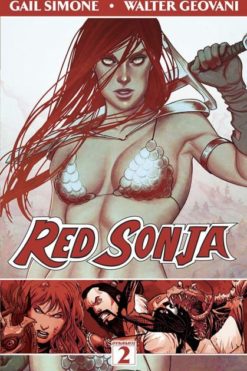