After starring in numerous mini-series (the Robin mini-series, Robin II, and Robin III: Cry of the Huntress) Batman’s sidekick finally got an ongoing title of his own.

The title character, Timothy Drake, is the third Robin. The original, Dick Grayson, had become Nightwing; his successor, Jason Todd was killed by the Joker. Drake is a teenager who battles the normal troubles of schoolwork and girlfriends when not swinging into action as a super-hero. When Batman was incapacitated during the Knightfall saga, Robin was forced to partner with Azrael, then former-Robin, Nightwing, as they in turn assumed the identity of Batman. Throughout the chaos, however, it became clear that this Robin is more than capable of holding his own.
Collects Robin #170-174 and Robin/Spoiler Special #1 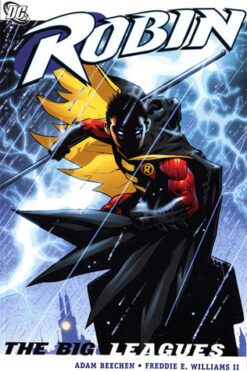