cover by bryan hitch mark millar (w)/bryan hitch (p) ? THE SCOOP: The dream team of Mark Millar (ULTIMATE X-MEN) and Bryan Hitch (The Authority) unleashes the fourth title in the red-hot Ultimate line! ? THE STORY: A mutant madman attacked the President of the United States on the White House lawn. A gaudily costumed teen climbs walls in New York City. The strange beings who’ve appeared overnight are here to stay. The old order has fallen, and people are scared. Nick Fury, head of the elite espionage agency known as S.H.I.E.L.D., has a unique solution: Put these bizarre characters on his payroll! His grand idea: a small but lethal army known as The Ultimates, created to protect us all from the rising threats to mankind! Reprinting THE ULTIMATES #1 – #6, featuring newly reimagined incarnations of Captain America, Thor, Iron Man, The Hulk, Giant-Man and The Wasp! ? THE FORMAT: 160-page trade paperback. 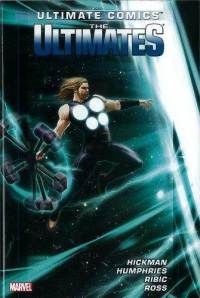 The Ultimates by Hickman HC Volume 2