In a dark and distant future, Armageddon has giving rise to the fabled Second Moon-and a perpetual war between the vampires and the humans! Esther is a nun in the city of Istavan. When she crosses paths with Abel Nightroad, a priest sent from the Vatican to combat the local order of vampires, the two form a holy alliance to battle the most evil of threats: Gyula, the leader of the vampires. Key Selling Points: ? Lead TOKYOPOP title: National consumer print advertising campaign and internet advertising targeting core manga and anime fan sites-more than 2 million impressions ? Cross-promoted with FUNimation, who is launching the anime in theaters in May and on DVD in Fall 2006 with DVD inserts and giveaways ? Number 1 on AOL’s most anticipated anime list for 2006 ? Gorgeous, gothic action series has a huge following in Japan ? A Pop Fiction series of Trinity Blood novel will launch Q2 2007 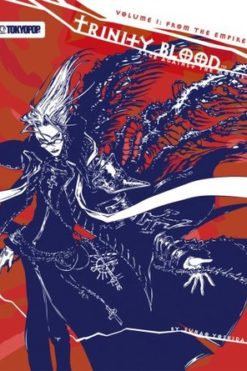