If you think about it, long-time Avengers member the Vision is a pretty spooky fellow: he’s an android who can render his body incorporeal. Essentially, he’s a machine that can become…a ghost. Creepy. And writer Geoff Johns (JSA)—who took over the scripting chores on Avengers (Vol. 3) around the time the first issue of this limited series hit the shops—plays with those seemingly divergent characteristics of Earth’s Mightiest Heroes’ resident android in this four-parter. It begins with a look at his unveiling as Professor Phineas Horton’s “vision of the future” at the 1939 World’s Fair and then, connects his fate in the modern world with the life of a young boy in Queens, New York, who is sick of moving around the country with his military father. One of Johns’ greatest strengths as a writer is his knack for finding the character element around which he can build a story, and he’s done it again in this tale of a machine who is more human than he knows.
1st appearance of The Vision; Origin of The Vision; Collects series; Plus reprinting Vision’s 1st appearance from Avengers #57; ca. 2005 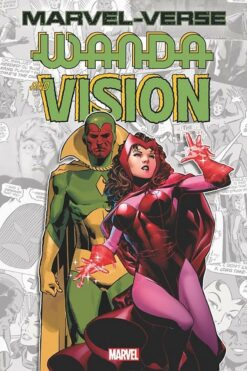