In a medieval world, a warrior known as a Wolfskin becomes enmeshed in a small civil war that has divided a village into two sides: first killing, then aiding one side against the other.

Warren Ellis tries his hand at the barbarian genre and, not surprisingly, most of his usual tricks and types are on display. For starters, it’s unbelievably visceral, scatological, and profane with plenty of literally gut-wrenching violence, but his “barbarian” is no stoic; there’s always time for nasty, insult-ridden exchanges that go on for pages at a time. The only thing that’s really new here is the taboo-shattering act our lead has in mind for his latest victim on the final page.

Ellis being Ellis, this can’t be just a blood-and-thunder story of a barbarian going after a magic jewel; the writer takes his time establishing the ethnic and religious backgrounds of all the major players. And, as usual, Juan Jose Ryp’s hyper-detailed art makes the proceedings that much more convincing. 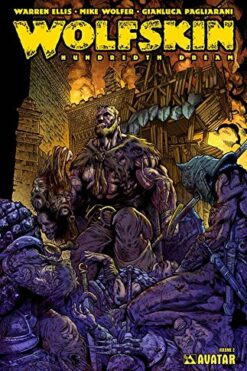